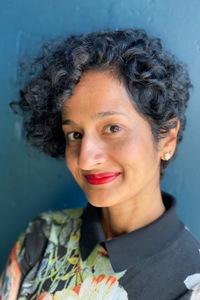 Describe your scientific identity.
I am a women's health researcher in practice. I identify as a woman of color, researcher, and feminist. As for training and skills, I am a sociologist who has conducted applied public health research for the last 15 years. I design, implement, and evaluate sexual health interventions for people leaving the criminal justice system.

What are your research interests?
My primary research interests are in the area of women's sexual health, funded by the National Cancer Institute (NCI), which is truly appreciated. We have a great website describing the "Sexual Health Empowerment" team's work at www.kumc.edu/she.

What is the significance of your current research project?
Women with criminal justice involvement have four to five times the rate of cervical cancer compared to women who don't have criminal justice histories. My NCI-funded research addresses this problem by investigating causes of the disparity, boosting women's cervical health literacy, and by working with the public health and criminal justice systems to offer women and men access to human papillomavirus (HPV) vaccination. There are over one million women under criminal justice supervision in the U.S., almost all with complex health and social problems, which is largely unseen by the mainstream population and media. Our efforts are intended to not only understand and address this problem, but also to shine a light on underserved women and empower them to address their preventable health problems.

What motivated you to work in health communication research?
For several years, I have been interested in understanding cervical cancer disparities faced by women in the criminal justice system. My research with women pointed to gaps in their cervical health literacy, and the best intervention models to address this problem were health communication focused. My first R01 was a jail-based cervical health literacy group intervention. The competitive renewal to that project is an R01 that expands across women's health conditions (i.e., cervical, breast cancer, sexually transmitted infections, and unintended pregnancy), moves the intervention to a Web and text format, and teases out the impact of human interaction in mHealth interventions. Our efforts incorporate multimedia and multimodal communications approaches to engage with these women in order to create effective interventions. Sylvia Chou, Program Director in the Health Communication and Informatics Research Branch of NCI has provided critically important guidance in this work. In addition, my other fabulous program officers Sarah Kobrin and Veronica Chollette, and other NCI staff like David Chambers and Cynthia Vinson have always been extremely helpful in supporting this work.

Describe something that had a profound influence on your program of research or scientific interests (an "ah-ha!" moment).
There were a few moments that relate specifically to my line of research:
1. 15% of the women in our first jail surveys said they had a Pap exam in the emergency room (ER). That's not possible; they do not provide cancer screenings in ERs! This was my "ah ha" moment, which motivated me to start investigating women's cervical health literacy as it relates to Pap experiences.
2. Data collected with the women led straight to an intervention that addressed knowledge, beliefs, and self-efficacy for cervical cancer screening. I reported findings in a paper entitled, "The Vagina is a Very Tricky Little Thing Down There," and created an intervention based exactly on what the women reported.
3. After that first intervention study, we have been following cohorts of women for almost five years. Now, in collaboration with colleagues who are also undertaking research on women with criminal justice involvement, we are conducting a comparative three-city (Kansas City, MO, Oakland, CA and Birmingham, AL), R01-funded study of cervical cancer risk and screening trajectories among women with criminal justice involvement. It will be one of the longest follow-up studies focused on this group of women.

Looking back, it was my early curiosity about inequality (kindled by a childhood in the Deep South and bedtime discussions with my dad about racism and politics) that ultimately motivated me as an adult to tackle the health disparities that affect marginalized women and men.”

* The Behavioral Research Program is grateful to this investigator for providing a Sample Grant Application as an excellent example of grantsmanship. The Adobe Reader is needed to read PDF files. Download Adobe Reader for free.


To request edits to this profile, please contact us at ncidccpsbrpadvances@mail.nih.gov.