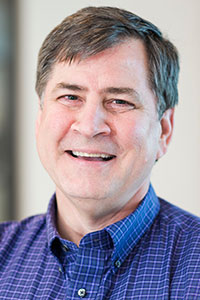 Program Director
Organization:
Content on this page is provided for reference purposes only. It is no longer maintained and may now be outdated.

Bob Vollinger, DrP.H., M.S.P.H., is the Program Director for State and Community Tobacco Control Policy and Media Research and previously directed the Tobacco Research Initiative for State and Community Interventions (TRISCI) in the Tobacco Control Research Branch (TCRB) within the Behavioral Research Program (BRP) of the Division of Cancer Control and Population Sciences (DCCPS) at the National Cancer Institute (NCI). The initiative supported research on innovative tobacco prevention and control interventions at the community, state, or multi-state level, particularly policy or media-based interventions. The results have guided tobacco control programs across the nation, to increase program effectiveness and produce real reductions in the prevalence of tobacco use.

Dr. Vollinger also manages a large portfolio of other grants, including one on the effectiveness of tobacco control policies in high- and low-income countries. In addition, he was the co-Senior Scientific Editor of NCI Tobacco Control Monograph No. 16, ASSIST: Shaping the Future of Tobacco Prevention and Control. Previously, he served as a Project Officer with the American Stop Smoking Intervention Study for Cancer Prevention (ASSIST) and managed numerous large contracts with state health departments, working closely with the American Cancer Society and other voluntary health organizations. He has provided technical assistance and training to state and local public health agencies, and major voluntary organizations regarding comprehensive tobacco prevention and control. He has worked on tobacco control research and policy issues at NCI since 1996.

Dr. Vollinger has held several health policy positions, including in numerous components of the U.S. Public Health Service: the Center for Substance Abuse Prevention; the Food and Drug Administration, on a special team drafting final tobacco regulations; the Office of the Surgeon General on Dr. C. Everett Koop's alcohol-impaired driving initiative in 1989; and the Office of Disease Prevention and Health Promotion in 1987. He was a Health Policy Fellow in the United States Senate Committee on Labor and Human Resources, Health Office, in 1990. Dr. Vollinger also represented the U.S. as the HHS delegate to the Japan America Leadership Exchange Committee, a bilateral exchange of civil servants from each of the cabinet-level ministries in their respective national governments. He has also served on numerous tobacco control advisory committees and steering committees at the national, state and local levels.

Dr. Vollinger has been an active member of the American Public Health Association since 1987 and has served in numerous leadership positions with the Alcohol, Tobacco and Other Drugs Section, including Section Chair and Governing Councilor. He is also an active member of the Society for Research on Nicotine and Tobacco. He received an NIH Merit Group Award for outstanding leadership in translating science into practice by developing the NCI smoke-free meeting policy to help protect the public from secondhand smoke exposure.

Current and/or past BRP mentees include Mary O'Connell, Julie Volkman, and Samantha Farrell.