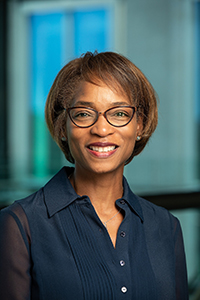 Paige A. Green, Ph.D., M.P.H., F.A.B.M.R., is chief of the Basic Biobehavioral and Psychological Sciences Branch in the Behavioral Research Program, Division of Cancer Control and Population Sciences, at the National Cancer Institute (NCI). Her NCI career has focused on cultivating research that generates fundamental knowledge of behavioral, biobehavioral, and psychological science mechanisms and elucidates their translational relevance for cancer prevention and control. She has built a multidisciplinary research program that spans from preclinical animal models to clinical studies of biobehavioral mechanisms and interventions. Recent initiatives include the NCI Network on Biobehavioral Pathways in Cancer and Cancer and Accelerated Aging: Research for Healthier Survivors.

Dr. Green received her undergraduate degree in psychology and her doctorate in clinical psychology from the University of Miami in Coral Gables, Florida. Her doctoral training included an emphasis on behavioral medicine and psychophysiology within the context of cardiovascular disease. She completed a clinical psychology internship, with specialization in health psychology, through the Brown University Clinical Psychology Internship Training Program, and postdoctoral fellowships at Memorial Sloan Kettering Cancer Center and Howard University Cancer Center (HUCC). In 2005, she received a Master of Public Health degree from Bloomberg School of Public Health at Johns Hopkins University. After working as an assistant professor of medicine at the Howard University College of Medicine and a research psychologist at HUCC, she joined the Behavioral Research Program as a program director in 2001, and she has been branch chief since 2007.

Dr. Green is an elected fellow and secretary of the Academy of Behavioral Medicine Research and a member and past leader of the American Psychosomatic Society. She has served as editorial board member, guest editor, and manuscript reviewer for a variety of peer-reviewed journals, including American Psychologist, Health Psychology, Psychosomatic Medicine, and Brain, Behavior, and Immunity.

Dr. Green is a 2010 graduate of the NCI Senior Executive Enrichment & Development Leadership Program. She has received National Institutes of Health (NIH) Awards of Merit for the NIH Genes, Environment and Health Initiative (2012); the NIH Basic Behavioral and Social Science Opportunity Network (2012); and leadership of basic behavioral science at NCI and NIH (2013). Dr. Green received the 2015 NIH Director's Award for exemplary performance while demonstrating significant leadership, skill, and ability in serving as a mentor, and the 2015 NCI Knowledge Management Program Exceptional Mentor Award. In 2015, Dr. Green was selected as one of five federal servants to receive the 2015 Meritorious Research Service Commendation from the American Psychological Association Board of Scientific Affairs, in recognition of her outstanding contributions to psychological science at NCI.


Current and/or past BRP mentees include Jennifer Guida and Korrina Duffy.