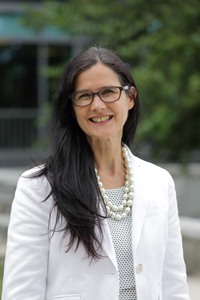 Stephanie Land, Ph.D., (she/her/hers) is a Program Director and Statistician in the Behavioral Research Program Tobacco Control Research Branch (TCRB) at the National Cancer Institute (NCI). Her areas of focus are tobacco use among patients in the settings of cancer prevention, screening, treatment, and survivorship. She serves on the American Association for Cancer Research (AACR) Tobacco and Cancer Subcommittee and is chair of the NCI-AACR Cancer Patient Tobacco Use Assessment Task Force. Dr. Land is the NCI lead for the Smoking Cessation At Lung Examination (SCALE) Collaboration, a collaboration that will share data and methods across eight funded projects to pursue research on cessation interventions that are efficacious and feasible in lung cancer screening clinics. She is also the NCI lead for the Cancer Center Cessation Initiative (C3I) and the Director of Tools and Resources for the Society for Research on Nicotine and Tobacco (SRNT) - University. Dr. Land is a member of the National Lung Cancer Roundtable. Additionally, she is a member and past chair of the Division of Cancer Control and Population Sciences Clinical Trials Coordination Group. Formerly, she was a member of the NCI Special Studies Institutional Review Board, Associate Editor for the Journal of Clinical Oncology, and a member of the NCI Clinical Trials Stewardship Committee.

Before joining NCI in 2011, Dr. Land was co-founder and director of the Reduce Smoking and Exposure to Tobacco (ReSET) Center, an Associate Professor of Biostatistics at the University of Pittsburgh, and a member of the American Schools of Public Health Tobacco Use Council. She has twice served as principal investigator. In one project, she led an NCI-funded study on smoking and other lifestyle behaviors as predictors of patient adherence to chemoprevention in the setting of breast cancer. The second project was an intramurally funded study of tobacco use and social network formation during the first year of college.

Dr. Land has more than 100 research publications in print. From 1999-2011, she was a statistician in the National Surgical Adjuvant Breast and Bowel Project (NSABP), an NCI-funded clinical trials cooperative group that conducted multi-center phase III trials for breast and colorectal cancer. Her primary role in the NSABP was as the lead statistician for the Behavioral and Health Outcomes Program. She also collaborated with members of the University of Pittsburgh Cancer Institute Lung and Thoracic Malignancies Program from 1999-2011 and served as the lead statistician for the Lung Cancer Specialized Program of Research Excellence (SPORE) from 2002-11, directing the Core through two competing renewals. Before coming to NCI, Dr. Land participated in the Community Clinical Oncology Program (CCOP) Research Priorities Strategic Planning Committee (NCI), Subcommittee H (reviewing cooperative groups), the NCI Symptom Management and Quality of Life Scientific Steering Committee, and numerous NCI grant review panels. Dr. Land earned a doctorate in statistics from Stanford University.


Current and past mentors include Sarah Kobrin.


Current and/or past BRP mentees include Lia Sorgen and Leeann Siegel.